Every Falling Star: The True Story of How I Survived and Escaped North Korea by Sungju Lee, Susan Elizabeth McClelland

Like "The Diary of Anne Frank" and "Zlata's Diary", this is a story of a child living in a horrific situation caused by the politics in that country. The country is North Korea. The time is the recent past until now. Until he was 12 years old, Sungju lived a privileged life with his parents enjoying school, the TV show that they were allowed to watch, the nice apartment they lived in and he wanted to be a military man like his father to serve their wonderful eternal leader in their wonderful country. Then, his parents told him they were going on a "vacation" in the country. In reality, his father had done something that displeased the military and they went to join the majority of North Korean society - poor, desperate and oppressed. After his parents left to find a better life and food and never returned for him, Sungju became a street boy and part of a gang of street boys. That part made me think about the negative things that our current president says about immigrants being gang members, criminals and bad people. Sungju was in a gang. He was a criminal. He did bad things. He did that because that was the only way he could survive. He was in a gang of boys from the time he was 12 to the time he was 16. He stole and beat people up and made money by bringing men to the prostitutes who were girls his age who were being exploited. He did those things to survive, not because he was a bad person. Would he be unwelcome in the US because of that? Years after his father left, when Sungju was 16 years old, he found his grandparents, and then his father was able to find Sungju and have him smuggled out of the country. The story paints a tragic picture of life in North Korea and is a must read. I think this will educate children as well as adults about the situation there.

Posted by herdingcats at 7:45 AM No comments:

Jamie's husband Mike is a policeman.  After his partner is shot and severely injured in front of him, Mike isn't the same.  This is the story of a police shooting from the side of the policeman's family.  As they struggle through the aftermath and search for the truth, will their marriage survive?  This is an excellent story.
Posted by herdingcats at 4:30 PM No comments:

This is the third book in a series.  I haven't read the first two, but this book stands fine on it's own.  It is a fun middle grade fantasy mystery in which Oona, a magician in training tries to solve the mystery of a theft from the museum and tries to find her father's murderer.  Oona has learned about women's rights and wants to help elect a woman to office.  She also likes a boy and is going through magician testing.  I think that middle grade kids will enjoy this cute book.
Posted by herdingcats at 6:03 PM No comments:

The World That We Knew by Alice Hoffman 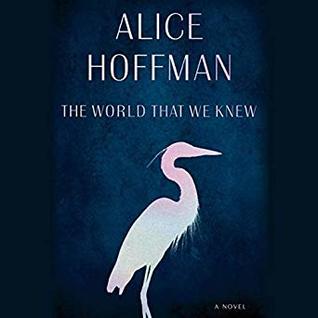 Such a wonderful book!  Alice Hoffman's wonderful magical realism is set in WWII as a young Jewish girl's mother conspires to create a golem to keep her daughter safe through the war.  We follow Lea and Ava's journey along with the journeys of others as they fight to survive the evil that was the Holocaust.  It saddened me to read about the Jewish refugees turned away and the way that the newspapers called the Jewish people animals during that time because I see that happening now, in the US in some stories about immigrants.  "That was how evil spoke.  It made its own corrupt sense; it swore that the good were evil and that evil had come to save mankind."  I hope that history is not repeating itself again.  I am sure that many people will enjoy this story.
Posted by herdingcats at 3:21 PM No comments:

The Book Charmer by Karen Hawkins

This is one of those books that I was sad to finish because it was such a fun read.  It is a feel good book.  Magical realism and a bit of romance abound in this book about Grace, who moves to Dove Pond to care for her niece, Daisy and her foster mother after her sister passes away.  Mama G., Grace's foster mom who raised Grace and her sister, Hannah, has altzheimer's and is declining quickly.  Daisy, Grace's 8 year old niece, is sullen and Grace is overwhelmed.  Her neighbors, Sarah Dove, who hears books talk to her and Trav, along with the other townspeople help Grace as much as she helps the town.
Posted by herdingcats at 8:08 PM No comments:

A Higher Loyalty: Truth, Lies, and Leadership by James Comey

I totally found this book to be fascinating and surprisingly well written.  James Comey tells his life story, about his career in the legal system and how he came to be Director of the FBI and later, to be fired from that position by Donald Trump.  I learned a lot from this book about the American legal system, about the FBI, and about James Comey and his relationships with and thoughts about presidents George W. Bush, Barack Obama, and Donald Trump. (Spoiler, he respects Obama the most.) I highly recommend this book to  everyone.
Posted by herdingcats at 7:05 PM No comments: