Flat Broke With Two Goats : A Memoir by Jennifer McGaha 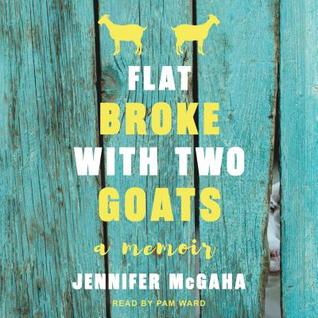 After falling into financial ruin due to her accountant husband not paying taxes, Jennifer and her husband, David wind up living in a falling down cabin in the mountains, raising chickens and goats, a far cry from their old suburban lifestyle.  Jennifer teaches writing at colleges and her book shows that she is a writing teacher using lots of description in her writing.  I listened to the audio version which was well done.  It is an interesting story, although they had more than two goats.
Posted by herdingcats at 3:26 PM No comments:

The Weight Of Lies by Emily Carpenter

Meg Ashley, poor little rich girl who grew up ignored by her rich and famous author mother, finally has the chance at revenge.  She has been asked to write a tell all memoir about her mother.  In order to do so, she must visit the island on which her mother's famous book is based.  What is the true story behind her mother's famous murder mystery, Kitten?  Who really killed the child?  What is her mother hiding?  Did members of the Kitty Cult stumble upon the truth?  Will Meg be able to find out the truth and survive it?  This is a fun mystery suspense novel and I enjoyed it very much.
Posted by herdingcats at 10:33 AM No comments:

It's Ok That You're Not Ok: Meeting Grief and Loss in a Culture That Doesn't Understand by Megan Devine

"Grief changes you.  Who you become remains to be seen.  You do not need to leave your grief behind you in order to live a newly beautiful life.  It's part of you.  Our aim is integration, not obliteration."
It has been a little over two and a half months since my husband passed away from cancer.  He had been diagnosed with cancer two and a half months before that and we had been told to prepare for the end.  I thought that I understood death.  My mother and my grandparents passed away when I was in high school and my father passed away eighteen years ago.  We knew that my husband was dying.  But, I was not prepared for this loss.  At all.  It was, and is much worse than anything I have ever experienced or could have anticipated.  I have found this book to be very helpful in dealing with my own grief and with how other people deal with me.  I think it is a wonderful book both for people who have lost someone and for other people to learn how to treat those of us who are going through the grieving process.  I got this book through an inter-library loan and requested that my library purchase their own copy so that others here may benefit from it. I may even purchase a copy for myself because I want to go back and reread parts of it.  I highly recommend this book.
Posted by herdingcats at 8:22 AM No comments:

The Water Cure by Sophie Mackintosh

This book tells the story of three sisters; Grace, Lia, and Sky.  They have been raised by their parents, King and Mother, apart from the rest of society, which their parents have told them is damaged and damaging.  Their parents force them to do all sorts of self-destructive rituals, which they say are good for them and they also drug them.  The story is unclear about what really is happening in the rest of the world.  Their father, King, has died, three men wash up on the shore, and soon afterwards their mother disappears and the three girls are left to deal with the men on their own.  Part dystopian novel and part psychological thriller, this novel tells a unique story.
Posted by herdingcats at 8:06 AM No comments:

The Bodies We Wear by Jeyn Roberts

In this young adult dystopian novel, society has been partially destroyed by a drug called Heam that is highly addictive and deadly.  Heam addicts are seen as scum and their lifespans are not very long.  Faye and her best friend Christian were forced to take Heam when she was 11 and he was 13.  She survived, he did not.  She is now living in squalor with an ex-police officer who rescued her and took her in after her mother kicked her out for taking Heam.  She has been training physically since she was 11 years old learning how to defend herself, with plans for revenge on the men who dosed her with Heam.  Then, a mysterious, handsome young man shows up who seems familiar to her.  Fans of young adult dystopian novels should enjoy this book.
Posted by herdingcats at 8:26 AM No comments: