The Girl, the Gold Tooth and Everything by Francine LaSala 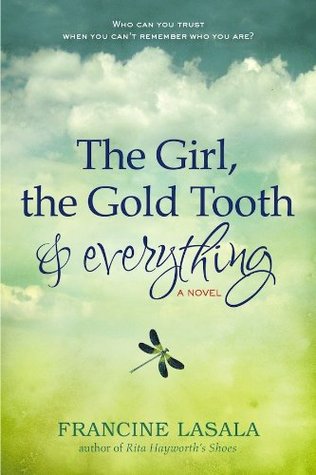 This book starts out kind of slow and confusing, partly because the main character, Mina, is confused because she is suffering from amnesia and is not real clear about what is real and what is not. I skimmed some of the first part of the book to get to the plot. Mina has a 3 year old daughter and her husband Jack travels a lot for work. They are having financial problems and bill collectors call frequently. So frequently that Mina has become phone friends with one of the bill collectors. Because her doctor has said that she should recover her memories on her own, no one will fill Mina in about her past or what happened to cause her to lose her memory. Her elderly neighbor Esther, helps her by babysitting her daughter, but the other younger neighbors do not like Esther. As her memories begin to return, Mina meets her Uncle Alex and a friend named Char'a-tee, only to learn a little while later that her uncle died two years ago. Fearing that she is losing her mind, Mina tries to dig into her past even though the doctor has told her not to. She finds more trouble than she had imagined. I liked the story once I got into it, but it had some inconsistencies and really unbelievable parts. I received this book free to review from Netgalley.
Posted by herdingcats at 5:59 PM