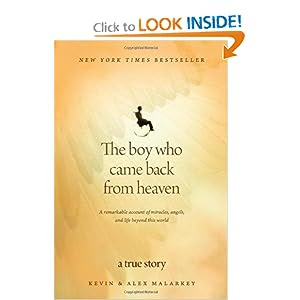 This book tells the story of Alex, who was 6 years old when he was in a horrific car accident with his father, who was driving.  Alex's head was severed from his spinal cord and he was not expected to live.  However, many people prayed for him, and he did live.
Alex has told others that he went to heaven and spent time with "God and angels and that angels are often with him.  There are examples of some of those times given in the book of some of those times and a picture of a painting that a woman painted that shows Alex with angels surrounding the head of his bed.

He also has said that there are times when Satan or demons attack him.  I thought that was interesting.  He said that when demons are around, they accuse him of things, make him feel doubt and sadness and that he feels like he would never be healed and that God won't protect him.  However, he has learned to pray in Jesus name to make the demons leave.

I find that very interesting.  Are doubt, insecurity and unhappiness and sorrow always indicators of the presence of demons?  Can we pray them away? When we pray to Jesus we are brought into His presence and enjoy Him and have His peace.  But not always right away.  Why is that?  This book, and Heaven is Real, both indicate that the children saw the spiritual warfare that is going on.  I really am not sure what to think about all of that.  It is something that is just not in my realm of experience.  I think I probably prefer it that way.

Alex wants to go back to heaven.   He does not fear death.  I like his description of heaven as not the "next" world, but existing now, and not in the sky, but being both everywhere and nowhere  and indescribably wonderful.  He does not  describe heaven like the Christian religion often portrays it with mansions and golf courses and other such nonsense.  Alex claims to visit heaven in his sleep and that he prays unceasingly.

Interestingly, in the past, I had always thought the whole heaven and hell concept was a lot of malarkey .
The more I read about people's expereinces of it, the more I wonder though.  I have experienced God.  I know that He is real.  I believe that angels do exist and watch over us because I have seen things happen to my children that were such near misses that it really seems that an angel stepped in and moved them so that they were not hurt.  I like Alex's message that God is always with us and that we need Jesus in our hearts.
I like his vision of heaven and that he does not give too many details.

Posted by herdingcats at 9:20 AM