Stones Into Schools by Greg Mortenson 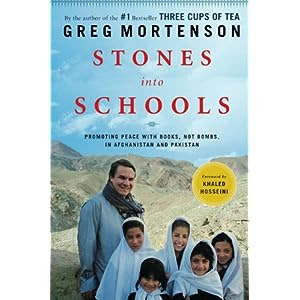 While I was reading this book, the tv show 60 Minutes did an exposee on Greg Mortenson claiming that many of the stories in his first book, Three Cups of Tea, were exagerated or lies.
Here is one of the articles about that.  http://news.yahoo.com/s/dailybeast/20110418/ts_dailybeast/13572_isthreecupsofteawritergregmortensonafraud
If Three Cups of Tea really is not all true, that is sad.

I liked the book Stones Into Schools very much anyway.
It has a different co-author than Three Cups of Tea, and he is not even listed as a co-author, but rather is acknowledged in the end of the book.  This book has two co-authors in addition to Greg Mortensen.  I think this book is written better than the first book.  It is written in the first person, rather than in the third person, which makes it easier to read and it flows nicer.  The language and imagery in this book are also better than the first book.
I learned a lot about the history, geography and politics of Afghanistan from reading this book.  It is well-researched as well as being well-written.
I found the book a bit long and it is rather self-aggrandizing of Greg.  However, the issues that it brings up, and the concept of fighting the war on terrorism with books, not bombs and the importance of educating girls and women are very important and valid.
Posted by herdingcats at 11:36 AM