The Darkest Lie by Pintip Dunn 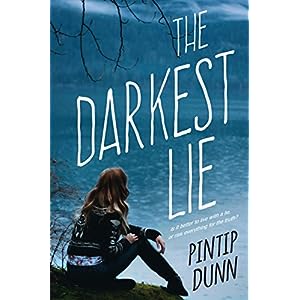 First of all - trigger warning - this book covers several controversial subjects including bullying, rape, pornography and others.  As the book begins, CeCe is dreading returning to school since her mother, who had been a teacher there, had committed suicide after a student revealed that she was having a sexual relationship with him.  CeCe's dad does not believe that was true and she has no idea what to believe.  A new student, Sam, is writing a story about the situation in order to win a journalism scholarship.  CeCe wants nothing to do with him, but he is good looking and nice and they become friends anyway.  As they investigate things, it becomes clear that there is more to the story than meets the eye.  Mystery, suspense and rather dreadful things going on fill the story as CeCe is bullied while trying to uncover the truth.  I received this book free to review from Netgalley.
Posted by herdingcats at 10:57 AM