Simon Thorn and the Wolf's Den by Aimee Carter 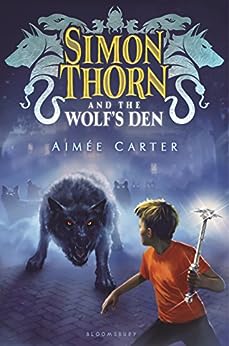 Like Harry Potter, Simon Thorn has powers that he does not know about or understand.  He is 12 years old and has recently been able to talk to and understand animals.  Similar to Harry Potter and Percy Jackson, Simon eventually winds up at a school for others who have similar abilities, who are also Animalgams, people who can shift into animal forms.  The others all grew up knowing about their abilities and world, where as Simon had grown up in the normal world knowing nothing about the other world to which he belongs.  He makes some friends and learns more about his family and his destiny and begins to fight the ones who want to take over.  I think that middle grade students who enjoy fantasy will enjoy the Simon Thorn series.  I look forward to reading the other books in the series.
Posted by herdingcats at 4:46 PM