Heaven is for Real by Tod Burpo 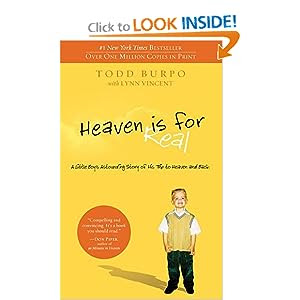 This is a story of a man who is a pastor and his son Colton, at age 3, had appendicitis and almost died. Perhaps he did die on the operating table because the doctors and nurses were convinced he would not make it . And, months later, when passing the hospital, he told his dad that he saw Jesus there and the angels sang to him. Over the next few years, the boy shared his experience of heaven with his family. He saw his grandfather there and his grandfather was young and did not have glasses. He was later able to identify his grandfather in a photograph when the grandfather was 29, but did not recognise a photo of the grandpa at age 60.

Another time, he asked his mom why they never told him that he had two sisters because one had died in her tummy. They had never told him that she had a miscarriage, but he said he met his sister in heaven. When asked her name, he told them she had no name because they had not named her - which was true.
The book is very very intersting. Since Colton had said he had seen Jesus his parents asked him what Jesus looked like. They would show him paintings and drawings of "Jesus", but Colton said they were all wrong.
Until they showed him this one
http://artakiane.com/gallery
look at the age 8 group - 2nd painting - titled Prince of Peace.
Posted by herdingcats at 9:37 PM