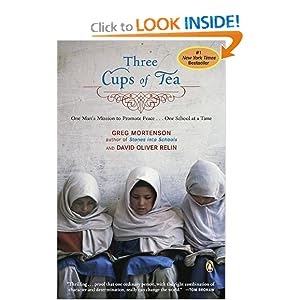 This book tells about Greg Mortenson's mission to build schools for children in Pakistan.
It is very interesting and I learned a lot about Pakistan and the social and political issues there that I did not know before.  I learned that Muslims are not all fanatical extremeists and terrorists, but that the fanatical extremist groups have grown in those areas due to the extreme poverty and lack of education.
Greg risked his life over the years and built relationships with the people of Pakistan and has helped to build many schools there to educate their children and especially their girls.
I am impressed that he kept trying and did not give up despite the harsh and dangerous conditions.
He got kidnapped and almost killed once, he slept on the floor in smokey cold huts, he was able to negotiate with smugglers, he met the president of Afghanistan, he saw Mother Teresa's body after she died, and the first girl who graduated from his first school went on to a medical school and wants to start a hospital in her town.
I am thrilled that the girls in Pakistan are now getting educated and can overcome the conditions in which they have been raised.
I highly recommend this book and I am going to read his other books as well.
Posted by herdingcats at 10:50 AM