Rashi: A Portrait by Elie Wiesel 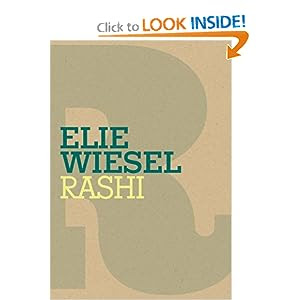 In this book, Elie Wiesel tells the story of Rashi, the most renowned Jewish commentator of the Jewish scriptures, and Talmud.  Rashi, Shlomo Yitzhaki,  lived in France in the 11th century and to this day, his commentary is used and respected.  Wiesel tells a bit about France in the 11th century and how Jewish people were treated then and about the Crusades and their devastation on the Jewish people.  Mostly, he speaks about Rashi being a genius, and he tells what is known about Rashi's life, however, in many respects, not a lot is known about his life so there is not a whole lot to tell. Wiesel shares some of Rashi's commentary on the Torah and gives his own view of Rashi's statements.

I am reading The Stone Edition Chumash, which includes Rashi's commentary so I have already read much of the commentary that Wiesel included in this book.
It is an interesting little book, but I think I was expecting a bit more from it.
Posted by herdingcats at 7:46 AM