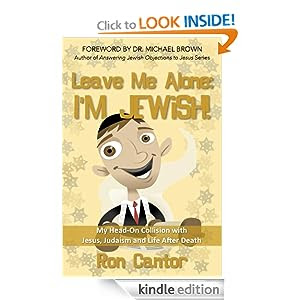 At first, I was prepared not to like this book, when I saw that Ron basically became a Christian because he was worried about what would happen after he died.
I realize that is the reason that many people become or remain Christians, but as a Reform Jew, I was just taught that when you die, you are dead, and that's it. And I was always ok with that. Even now, as a born again Christian, I don't know what happens to people after they die. There are lots of theories, but no one really knows for sure. And I don't think that one should chose one's religion or change one's life based on fear of death although many people do become better people - at least outwardly - for that very reason. I think that religion and knowing God should be about life and our living, not about what may or may not happen after we die.

Anyway, I skimmed parts of the book because it was just the regular fundamental evangelical view of the gospel, but Ron also told his and his wife's stories, which were interesting, and he shares the Messianic Jewish religion's views. He shares some of the history of how Christians have treated Jewish people over the years and I think that might be enlightening to people who are not aware of it. He also shares the Jewishness of the early Christian religion, which many mainline Christians may not be aware of.

I do think the book is interesting although it seemed to jump around in time which made it a bit difficult to follow in parts.
Posted by herdingcats at 2:14 PM