Welcome to Night Vale by Joseph Fink and Jeffrey Cranor 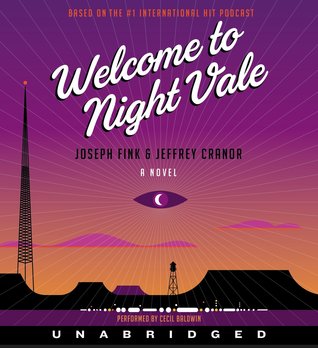 My sixteen year old son introduced me to the Night Vale podcasts several months ago.  I totally love them and understand why my son loves them too.  I listened to all of them before getting the book.  My husband asked me if the book would make sense to people who have not listened to the podcasts.  I think it could be read/listened to without having heard the podcasts, but you would not have a lot of the background information and it is better if you have been following the podcasts.  I got the audio book and the physical book and listened to most of it and read some of it.  I think I like the audio better than the written book. I love the narrator and I think he adds something to the story that is just not the same without him.  The story is a bit like the old Twilight Zone TV series in that many inexplicable and creepy things go on in Night Vale, but are seen as perfectly normal for the most part by the people who live there.  This story follows Jackie Fierro (I have a cat named Fierro - had him and his name long before this podcast and book came out though) who is the perpetually 19 year old pawn shop owner and Dianne Crayton whose son Josh changes his physical form on a regular basis.  Their lives become entwined as they both need to find The Man in The Tan Jacket who everyone forgets and Troy, who proves to be quite elusive.  I thought the plot twists in the book were quite interesting and I enjoyed it very much!  I hope they keep up with the podcasts and perhaps write another book - or maybe it could make an intriguing movie.
Posted by herdingcats at 9:12 AM