The Faith Club: A Muslim, A Christian, A Jew - Three Women Search For Understanding by Raqyna Idliby, Suzanne Oliver, and Priscilla Warner 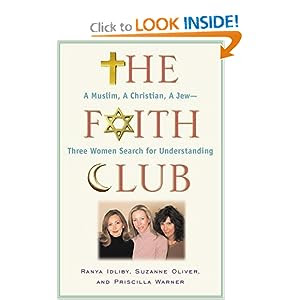 I just finished reading this book and it has really made me think.  A lot.  I personally am a Jew - raised in the Reform Jewish religion, and I became a born again Christian 20 years ago when I was 27 years old.  So, I know about the Jewish and Christian points of view that are presented in the book.  I know very little, however, about the Muslim religion.  I read the books "Three Cups of Tea" and "Stones Into Schools" this year and they gave me more insight into the Muslim religion than I had before and this book has taught me even more.
After 911, Rayna, the Muslim mother in this book had decided to try to write a book for children about the connections between the Muslim, Jewish, and Christian religions, so she mentioned that idea to a Christian friend of hers - Suzanne, who then contacted Pricilla, a friend of a friend who happened to be a Jewish mother who was a writer.  I guess they never wrote a children's book, but this book is about their "Faith Club" as they call themselves and their discussions of the three major world religions that they had together and how their relationship changed all of their views of the three religions including their own personal religious views as they got to know one another over a few years.
Interestingly, none of these three women are or were very fundamentalist in their religions.  Had they been, I doubt they could have had the relationship that they do.  To me, Suzanne an Pricilla seem to be pretty typical representatives of the Christian and Jewish religions as I know them.  I am not sure about Rayna since I really don't have any friends who are Muslim.  She talks a lot in the book about her difficulty in finding like-minded Muslims who are not fundamentalist and radical in their views which makes me think, sadly, that she may be more atypical than typical as a representative of her religion.
I identify very much with Priscilla, because my Jewish background has highly influenced my understanding of God even though I am a born again Christian.  Like Priscilla, I am unsure if there is an afterlife, because the Jewish religion does not focus on or teach about that. I have long wondered how the Christian religion can claim to be the "fulfillment" of the Jewish religion when they focus so much on the afterlife which is not even a major part of the Jewish religion, nor is there a concensus on it as part of the Jewish religious beliefs.  Like Priscilla, I also have high blood pressure and expect to have my medication for that changed soon.
I understand the feeling of being a minority and the influence of the Holocaust.
I enjoy the explanation of the Muslim religion that Rayna shares and Suzanne's journey to accept the other two religions.
I think that this is a very good book and I highly recommend it.
Posted by herdingcats at 9:18 PM