so, I saw a door standing in the middle of a field (this one is not a book review)

As I drove around behind the bank to go through it's drive-through service area, I noticed a door standing in the field behind the bank. It immediately piqued my curiosity as thoughts of fantasy novels where people step through doorways in the middle of nowhere into other worlds, realms and dimensions flooded my mind. Fairly certain that this door did not lead to another dimension, and not recalling having seen this door during previous banking trips, I remained curious about it's presence standing in the field behind the bank. So, after making a deposit at the drive-through, I drove to the edge of the parking lot to take a closer look at the door standing in the field.
Then, I saw that the door was in a wooden frame - about the size of an outhouse, and it looked like the type of door one would see inside a house - painted white, with inset pannels. Curiouser and curiouser, I noticed what lay beyond the door - not through it, but beyond it to the left - a large vegetable garden. Wondering if the garden belonged to one of the home owners whose fenced yards backed up to the field, or to the church whose parking lot bordered the field, I parked, and walked out to see what the door was all about and to look at the garden. The door, as I said, was set in a wooden frame and the frame made a box around some metal boxes within it. It was a double door - but still the width of a regular door, and the two pieces of the door were padlocked together which at first seemed odd because there is empty space around the door and you can just reach around the door to touch what is within if you want to. As I drew closer to the door, I saw why it is padlocked and why it does not matter that you can reach around into the space behind it if you want to. You would not want to reach inside because the metal boxes inside of the framework are beehives.
I then walked around the beehives and the bees flying around them, behind the door and on to the garden. It is fenced and has 10 raised garden plots in frames of wood each one fenced individually, one with a mesh tent over it to keep birds out. There are water hoses and some jugs of water and lots of veggies growing there. Still wondering who it belonged to, I returned to my car past the beehives behind the door standing in the field which had originally evoked my curiosity. When I reached my car, an elderly man drove up and stopped next to it - and he told me about the garden. It is a CSA garden run by the church, approved and assisted by the city and there are quite a few others in the city.  I returned a few weeks later with my youngest daughter who thought it reminded her of Monster's Inc.
Here are some photos: 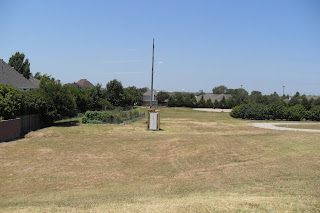 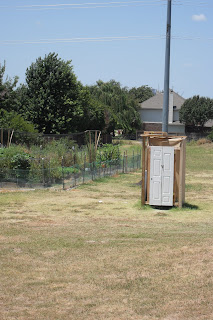 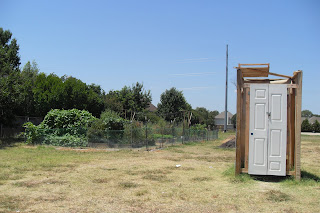 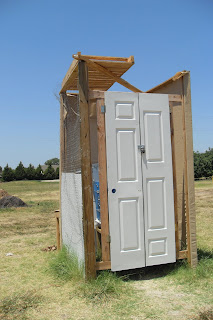 Posted by herdingcats at 9:37 PM