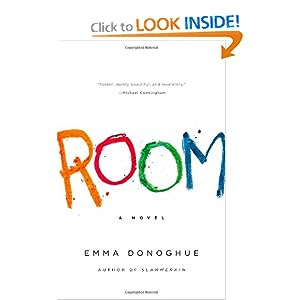 This is a creepy story told by Jack, the 5 year old son of his Ma, with whom he has lived for all of his life in an 11 x 11 soundproofed, fortified shed that is their prison, where Ma has been for 7 years since she was kidnapped by a man who we only know as "Old Nick".
Jack has never known anything in his life except the room in which he lives and he thinks that everything he sees on tv - all of the world outside of the room exists only within the tv and that only room, he, Ma, and Old Nick, who visits Ma at night while Jack is supposed to be sleeping in the wardrobe, are the only real things in the world.
Ma has taken good care of Jack and his days are filled with fun things to do with Ma.
But some days, she is "Gone" and does not get out of bed and Jack has to take care of himself.
This story is told well from Jack's perspective and we learn from him how scarey and strange the outside world is to a 5 year old who has only known room for all of his life.
Posted by herdingcats at 1:21 PM