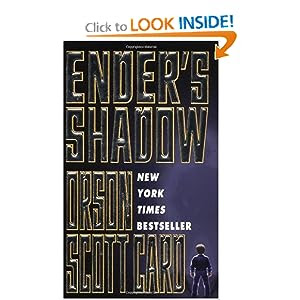 Written about 10 years after the book Ender's Game, this book is a parallel novel to Ender's Game.  It occurs in the same time frame, but tells the story of another character named Bean.
Like the original novel, this book is thoughtful and well written and it brings in another side of the same story.  If you liked the first book, you will like this one as well!
If you have not yet read Ender's Game, I highly recommend that one too.
In both books, earth had been attacked by a group of aliens called Buggers and the most intelligent children in the world are sent to battle school to train to fight them.  Ender and Bean are two of the children who are sent to battle school.  These books are often read in 9th grade high school English classes.
Posted by herdingcats at 7:11 PM