Left To Tell: Discovering God Amidst the Rwandan Holocaust 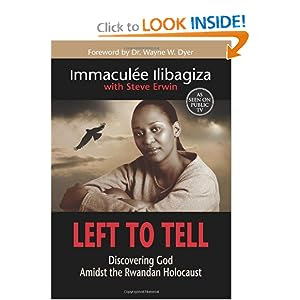 The book Left To Tell: Discovering God Amidst the Rwandan Holocaust by Immaculee Ilibagiza is a very touching story.  This book does not go into the politics of what happened in Rwanda and why, rather it tells Imaculee's story.  She tells about her childhood in Rwanda and how idyllic it seemed.  She tells how as a child, she began learning of the discord between the Hutus and the Tutsis.
She tells how she prayed and relied on God and how He helped her to survive the horrific genocide in Rwanda where her Hutu friends and neighbors killed her Tutsi family and friends and tried to find and kill her as well.  She tells of the Hutu pastor who hid her and several other Tutsi women in a small bathroom in his house which put him and his family at risk of also being killed.  She tells of her love for her family and how horrified she was to learn that her Hutu neighbors had shot them and chopped them to pieces with machetes.
And she tells how she prayed and was able to forgive her Hutu friends and neighbors who had turned against her and her Tutsi family and friends and called them snakes and cockroaches and killed them like they were those vermin.
She shares her faith and how the Lord helped her to forgive and love her enemies.
Her faith is touching, but the whole story of the holocaust there is horrifying and disturbing.
What on earth is wrong with people?  Why do they treat one another that way?  Why did the rest of the world allow it to happen?
Posted by herdingcats at 4:05 PM