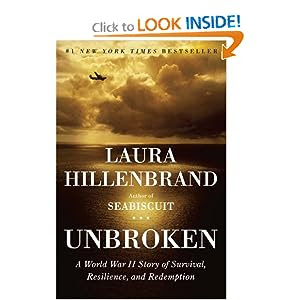 The full title of this book is Unbroken: A World War II Story of Survival, Resilience, and Redemption.
The book is incredibly well researched, well documented and well written.  It really helps you to see and understand what went on.  It is the story of Louis Zamperini, an olympic runner, who was in the Air Force in WWII.  He survived the wreck of the plane he was in, and then survived being in Japanese POW camps.
The author describes his childhood and how he became a runner and his experience in the Air Force.
She describes what it was like to be lost at sea in a small raft in the ocean with no food or water surrounded by sharks for almost 2 months.  She describes the atrocities that went on in the Japanese POW camps.
It was really horrible.  It is awful how human beings can treat one another.  She describes the PTSD that the soldiers went through after surviving such horrors and then coming home.  At the very end of the book, we get the redemption part - Louis becomes a Christian after going to some Billy Graham campaign meetings, he forgives the Japanese soldiers who abused him, and became an inspiration to others.
Honestly - I did not like this book.  I struggled through it.  The book is wonderfully researched and written, but the topic is just so horrible that I had a difficult time reading it.
Posted by herdingcats at 11:12 AM