fathermothergod: My Journey Out of Christian Science by Lucia Greenhouse 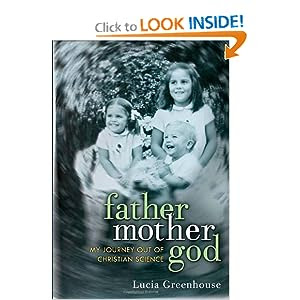 This is such a sad story!  Lucia tells of her childhood and how her parents raised her and her brother and sister in the Christian Science religion.  Her father was a Christian Science "Practitioner" and the family moved to London for a few years where the children went to Christian Science boarding schools.  Most of the book, however, deals with Lucia's mother's illness - which according to Christian Science, does not exist, and the way her family dealt with her illness and death.
I do not understand why anyone would forgo medical care when they are dying just for the sake of a religious belief.  It just goes to show that there is a very fine line between religious belief and stupidity - a thought that came to me today when I read about the Tibetan monks who self-immolated as a form of protest.
My favorite quote from the book is from a Presbyterian minister who Lucia spoke to about her mother's illness and Christian Science beliefs and her refusal of medical treatment.   He told her "When someone is drowning, he - or she - will grab on to the closest thing in reach. And they will hold on for dear life..., even if that thing doesn't float."
This book is wonderfully written and very touching.
Posted by herdingcats at 6:33 PM