The Winter of our Disconnect: How Three Totally Wired Teenagers (and a Mother Who Slept with Her iPhone) Pulled the Plug on Their Technology and Lived to Tell the Tale by Susan Maushart 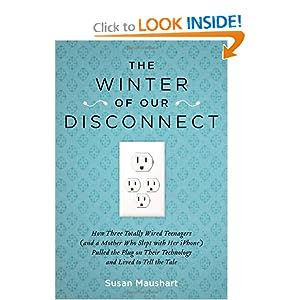 This story follows a Australian single mom of 3 as she bribes her three teenage children and herself to give up technology in the home including cell phones, computers, tv and anything with screens.  I found the beginning of the book rather slow going, but it got better. The author includes some very interesting research on the effect of media on learning - some positive and some negative, the fact that we can't really multi-task efficiently even though we think we can, studies that showed that some schools that gave students laptops did not show any measurable increse in learning, and other interesting bytes of info.
I found the study that links higher rates of autism to higher rates of screen time very interesting. It does not claim that screened media causes autism, but that it may be a trigger and may contribute to the problem.
During "The Experiment", the author's children got better sleep, had family meals together, found that they enjoyed board games, singing around the piano and socializing w/ friends IRL, and her son re-discovered his clarinet, learned Jazz, and started a band.  They all benefitted from "The Experiment" of no technology in the home, sometimes in very unexpected ways.
Posted by herdingcats at 8:41 PM