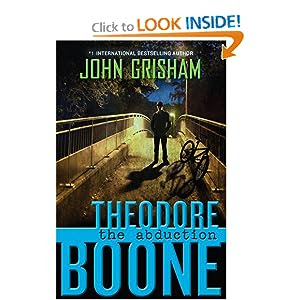 This is the second book that John Grisham has written about Theodore Boone who is a 13 year old son of two lawyers.  Theodore is a detective/lawyer himself who wants to be a judge because "In what other job can an entire room of people, regardless of their age, job or education, be required to stand in solemn respect as you enter the room?  Theo could think of only three - queen of England, president of the United States, and judge."  In this book, Theodore's friend April has disappeared and is presumed to have been kidnapped by her uncle who had been her pen pal and who had recently escaped from prison.  The book is well written and exciting and I was laughing out loud at the scene with the parrot in Animal Court.  I loved the book and thought it was fantastic!
Posted by herdingcats at 8:47 PM