Acts of Faith: The Story of an American Muslim, the Struggle for the Soul of a Generation by Eboo Patel 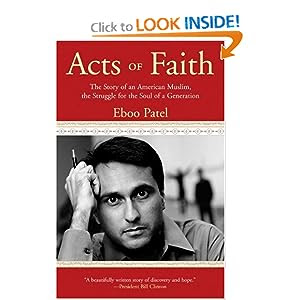 Eboo Patel is very smart and is a former Rhodes scholar.  He has doctorate in the sociology of religion from Oxford and is the founder of the Interfaith Youth Core, "an organization that unites young people of different religions to perform community service and explore their common values. "
He tells two stories in this book.

He tells his own personal story, one of growing up Muslim in America, being bullied by other kids because he was brown and Muslim, and his rejection of and later return to the Muslim religion that he was raised in.

The other story that he tells is how impressionable teenagers are brought into extremist youth groups because their religions have failed to engage them in positive ways.  He gives examples of Christian, Jewish and Hindu extremist groups as well as those that are Muslim.

Eboo's personal story is interesting and I learned more about the Muslim religion that I did not know.  He is an Ismaili Musilim, part of the Shia group that follows an Imam who is a supreme leader to them rather like the Pope is to the Catholics.  Their current Imam is known as the Aga Kahn.  Eboo's parents wanted him to learn service and charity to others and so they made him participate in a YMCA youth service group, which he feels helped to give him identity and kept him from possibly falling prey to extremist Muslim groups.

Eboo feels that extremist groups are more political than religious and that none of them really represent their religions as their religions are meant to be practiced.  He recognizes that extremist groups give huge amounts of money to create youth indoctrination groups, which certainly is true of the Muslim extremist groups. He tells about the school that Osama Bin Laden went to and decribes some of their teachings and methods.  He also gives examples of White Supremacy groups posing as Christian Youth educational groups and of a small Jewish extremist group in the 1960s.  He also tells of the Hindu extemist group called the National Volunteer Corps or RSS whose goal is "a pure Hindu nation" and while initally attracting youth w/ Hindu ideology, this group has been responsible for the murders of thousands of Muslims.

Eboo feels that the solution to extremist groups is to unite the youth of the various religions together to serve for a common purpose so that they will know and understand one another as similar human beings.  His group, the IFYC strives to do that. I think that is a nice idea.
Posted by herdingcats at 6:54 AM