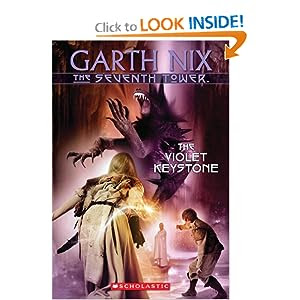 Tal and Milla both grow in strength and power in their new roles and gain more control over their halves of the Violet Keystone.  Milla battles the shadows and Uncle Ebbitt helps her, Malen and some others to get to the Seventh Tower in his own unique way.  Tal and Crow also reach the Seventh Tower through more mundane and disgusting pathways.  Together, Tal and Milla and the Stormshadows fight the final battle against Sharrakor, the evil shadow who had inhabited Sushin and tried to take down the Veil.

Each of these 6 books is full of action and ends in a cliffhanger.  Together, they all tell one story.  I felt it could have all been done in fewer books.  I found the ending a bit lacking in substance as well, but still would recommend it as a fun series to read.  My son is reading them now and I may update my review with his reaction to the books as well later.
Posted by herdingcats at 8:12 AM