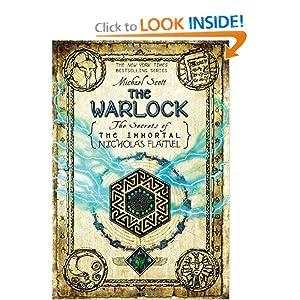 This is the 5th book in this series.  In these books, Sophie and Josh have learned that they are the "twins of legend" " spoken of in the prophesy "The two that are one must become the one that is all.  One to save the world, one to destroy it." Now that they know some magic and can use their powerful auras, they have been separated - Josh with Dee and Virginia Dare, and Sophie with the Flamels.  Which side is better, and which is worse?  Which twin is the one who will destroy the world, and which will save it?  And which world is referred to in the prohesy?  In this book they fight battles and travel in time along with immortals who include Billy the Kid and Shakespeare, Elders and others.  They fight monsters, ride in flying saucers and learn to use their magic even more.
If you have not read the other books in this series, I highly recommend them.
I look forward to the last book which will be out next summer.
Posted by herdingcats at 4:10 PM