I'm Perfect, You're Doomed: Tales from a Jehovah's Witness Upbringing by Kyria Abrahams 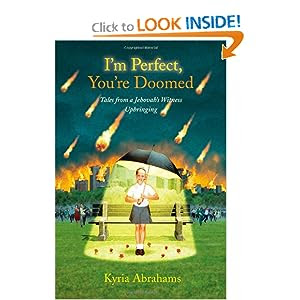 Raised in a dysfunctional Jehovah's Witness family, Kyria grew up believing that Jehovah's Witnesses was the one and only true religion and only they would survive Armageddon during which all non JW's would die, and then the JW's would live in The New System of Things, a perfect world populated only by JWs where they would play with tigers, the sun would always shine and life would be perfect and they could perhaps move into a nicer house that had been left behind by a non-JW. She believed that items bought from garage sales were demon posessed, birthday parties were evil, and she was afraid to eat pudding because it might be "blood pudding" and JWs were to "abstain from blood", including blood transfusions, which is why they carried a "No Blood" card in case they wound up in the hospital because it was much better to die and be roused in paradise than to sin by getting a blood transfusion and then die in Armageddon and never go to paradise.
Kyria is funny and tells about her childhood in a fun to read way, but once her story gets to her high school years, it is not so humerous even though she tries to make it sound that way.  She skipped a lot of school, was OCD, cut herself a lot, married a guy she did not care about just to get out of her house, became an alcoholic, did drugs, and eventually fell in with a group of poets and ran off with one of them to get away from her husband, get disfellowshipped from the JWs and go on with her life. That part of the story is very "R" rated and pitiful and just leaves you hoping that she finally got her act together.
Posted by herdingcats at 7:54 AM